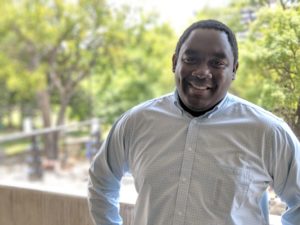 Mr. Fancher oversees operations and programming of the BLBA, including the management of staff and contract attorneys; reporting to the Board of Directors; development of policies and procedures; collaboration with other departments and agencies; community outreach; and ensuring the program carries out the mission adopted by the Board of Directors.

Mr. Fancher and his wife both left Birmingham for college, but were adamant about returning and raising their family in the City of Birmingham. Mr. Fancher has a great appreciation of the severity of the blight problem facing Birmingham. There are over five hundred blighted properties eligible for Land Bank in his and the surrounding neighborhoods. He is committed to seeing the BLBA empower citizens to eliminate blight, increase property values and see neighborhood revitalization in all 99 of Birmingham’s neighborhoods.

Mr. Fancher served as an Assistant to the Mayor for Capital and Special Projects from 2012 to 2017. He formerly lived in New Orleans, Louisiana, where he performed and studied Jazz at Loyola University. He returned to Birmingham and earned his Master in Public Administration from the University of Alabama at Birmingham and Juris Doctor from the Birmingham School of Law.